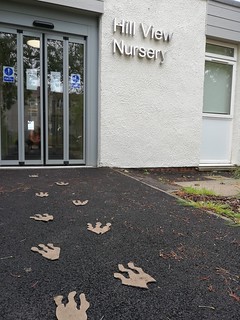 Working with Hillview Nursery in Dundee, Amy Hall-Gibson is an ‘artist in remote residence’ focusing on easing the transition back to nursery in August for pre-school children.

Using remote storytelling and drama techniques, Amy has introduced the arc of a story to the children and their parents/carers.

Whilst the nursery has been snoozing, a curious creature has been exploring and a precious egg has appeared. Who is the creature? What happens next? That’s up to the children’s imaginations.

Over 10 weeks, prompts, updates and photos will be shared using social media. Parents will be encouraged to help engage their children with the story, giving them the opportunity to suggest ways of making the egg feel safe and shape what happens next.

“Often the build up to an event is as big, if not bigger, than the event itself. I’d like to bring some curiosity and magic as the children look forward to returning to nursery.” said Amy.

“The children will be returning to a place they’ve known, but so much of the routine and the way the space is organised will be unfamiliar to them.

“My aim is to connect the children with the nursery digitally, several weeks before they’re due to return. An egg has appeared and the staff want to know how to look after it! Beyond this, the story belongs to the children. They’ll explore ideas from their own homes. There will be some visual clues and prompts but the children will shape the plot and the narrative.”

This work is part of Starcatchers’ Big Inspirations project, exploring ways of connecting with and inspiring young children whilst they are at home with their families. It is funded through Starcatchers’ artist development programme Playspace.

Amy is a Creative Drama Artist based in Sunny Dundee. She has worked on a number of projects for children with organisations including The Scottish Book Trust, The Drama Box, Feis Rois, Horsecross Arts and very recently, Starcatchers Creative Skills.

She enjoys using drama ingredients to play with and create new experiences and opportunities for young children where they are empowered and immersed in their own imagination.