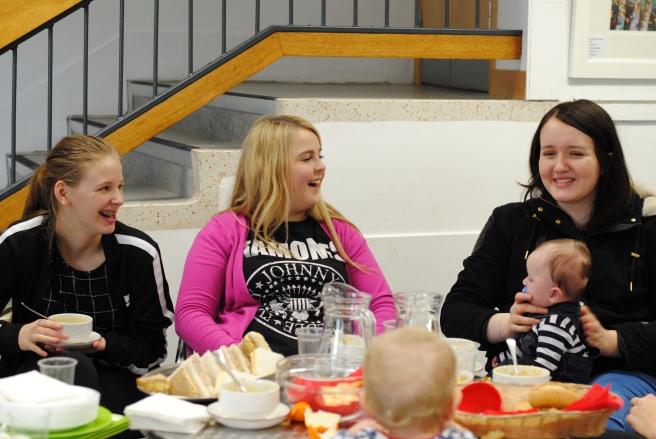 In a chat with Hazel, Katy, Rhona and Jo, I mentioned how I feel like Expecting Something is a multi-faceted project. You have the mothers and the babies, but also the “youth” aspect (it is for under 25s after all!). It feels like we’re trying to make a chord on the piano and when it works it is beautiful! But, hitting all of those notes can be a challenge… Some weeks, we recognise that one note is hit better than the other, but we are always striving to create experiences that stimulate both the mothers and the babies. The biggest challenge is that both of these groups of people have such different needs! The babies might want to run around, whilst the parents might want to just have an opportunity to do something for themselves. I guess the skill is in recognising where all our needs collide – where the adults can be creatively satisfied; where the babies have space to play and listen to the world.

A couple of weeks ago, musician Zac Scott came along to our group in Fife. We made lots of sound, tried out some different instruments and discovered what instruments the babies liked. From percussive instruments, to bells, xylophones and ukuleles, there were countless possibilities to create something new and to have fun – together. We aimed to create a space where all sounds were allowed and okay to try out – there was no pressure to be technically musical or do things right. Together, we hoped to make a session in which we as grown ups could make some sounds for the babies and visa versa. So much learning can be documented in a simple back-and-forth clapping game for example – a baby has to listen, watch their partner, take a turn at the just the right moment and maybe laugh and smile to keep their partner engaged. All of this builds important connections across the many regions of their brain needed to carry out the complex actions and interactions we require in order to thrive. It is this concept that drives any creative activity – what can we do in order to make others thrive? We even managed to play some music for the babies and parents on our own instruments in the afternoon (Maria had never improvised on her clarinet before, so even for her this session was a HUGE confidence builder!). We also talked together. We talked about school, about our favourite and our least favourite teachers. We talked about songs we like. We talked about how influential throwaway sentences from adults can be on our feelings and actions. We talked about feeling creative (or not). We talked about music we like. We talked about singing. We even mentioned “choirs.”

We didn’t quite manage to create a new song, due to lots of happenings, but still collectively enjoyed the process of engaging in a musical exploration. Perhaps the intention was also too broad. But in saying that, it is important that we think of music quite broadly: yes, singing and playing instruments, but also experimenting with sounds, noises, words and squeals, playing rhythmic games, and even moving to music. Informal musical activities have a known impact on the lives of children and families and the research within this particular age range is especially fascinating. We reflected on the idea that perhaps the best way to pitch the sessions is to actually not write new songs at all. What would it be like if we used songs we already knew and enjoyed and to try and recreate them instead? However, new music matters – so it’s key that we use this platform of singing songs we already know to then bring us around to a place of something brand new again. Think of how musical mothers are with their children in singing lullabies and in playing “pat-a-cake” for instance. Personal relevance is such a key factor in creativity and it seems that maybe we’ve accidentally found our way into it through the creation of a mother and baby choir! We found out that our group know, and like, Justin Bieber, particularly his song “Sorry”… (It seems like this song makes lots of babies dance! There must be something about his voice…) So, we’re thinking about how parents singing can be an experience with the babies in the centre. This led us to researching Mother and Baby choirs that already exist and what kind of music they interact with and perform. When we sing songs we all like, we have an opportunity to be creative and to then start to focus on detail and small challenges. It is also a means of multi-modal participation. Especially for young children, music comes alive, and engages more aspects of learning, when accompanied by gesture, dancing, and musical instruments. Engaging the whole child increases the impact of music on brain and motor development. An experience that we can design that holds a multitude of art forms and has the space for creative tangents is a goal for now, and we think that the inception of the choir will prove to be, erm, instrumental (ha!) So maybe next time Zac visits us, we’ll offer the opportunity to make our own versions of popular songs for the babies and with the mums, using the instruments we like and our own voice. Just like language, music is a shared, expressive, inventive, portable way to be together!

Stay in touch with Starcatchers!